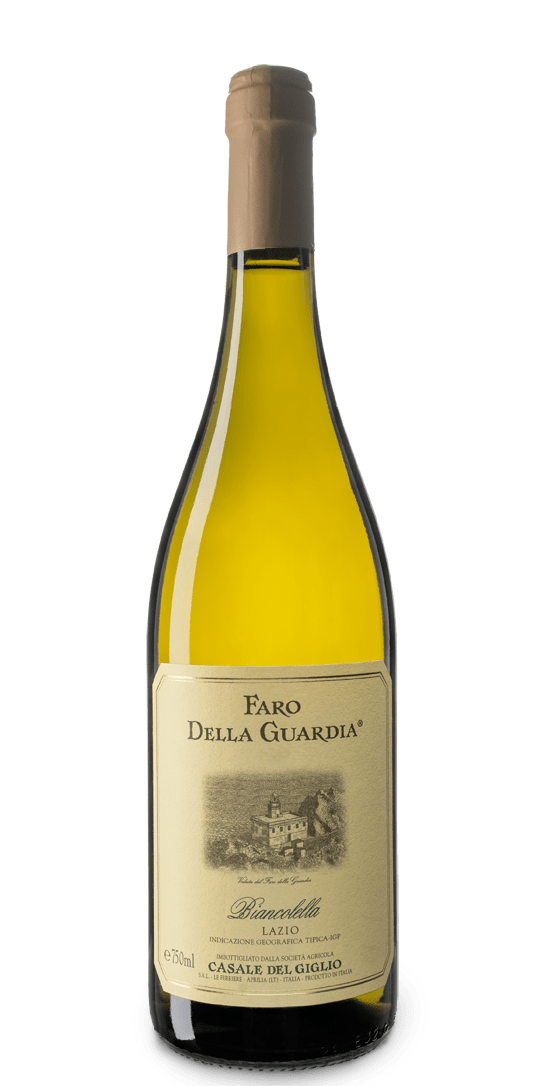 A native of Italy’s Campania region, the Biancolella grape was introduced to the Island of Ponza from the Island of Ischia (in the Bay of Naples) during the 18th century, when the city was ruled by the Bourbon monarchs.

Cultivation of the grape in the Lazio region is authorized exclusively on the Island of Ponza where it grows at the base of a sheer sea cliff surmounted by the imposing lighthouse, ‘Il Faro della Guardia’. Built in 1886, the lighthouse rises 112 metres above sea level.

Its rotating beam of white light has a range of 24 nautical miles and a mainly southerly sweep through 225 degrees.

The deepest part of the Tyrrhenian Sea, the trench known as ‘La Fossa del Tirreno’, lies some eleven miles to the southwest of the lighthouse rock.

]This white wine is produced exclusively from Biancolella grapes, a typical variety from central Italy and the islands.

The grapes undergo a ‘traditional’ white wine vinification process starting with a soft pressing of the whole grapes and a subsequent spontaneous fermentation at 20°C on indigenous yeasts.

It is then aged on the lees for about 7-8 months before bottling.

The palate is flinty and fresh, reminiscent of the ‘volcanic – calcareous’ vineyard soils and sea breezes that sustain the vine. A lingering fruitiness on the finish and a hint of citrus.

Linguine c’o Fellone – an emblematic pasta dish from Ponza made with the rare Granseola crab, known locally as ‘o Fellone’.

Recipe for 4 servings:
Place the Granseola in a pot of cold water. Bring to the boil and cook for 20 minutes.
Remove, allow to cool, then crack the shell and claws.
Brown lots of garlic and red hot chili peppers in plenty of olive oil in a large frying pan.
When the garlic is golden, add the Granseola and cook gently for about 5 minutes.
Place 500 gms of ‘linguine’ (flat ribbon pasta) in abundant boiling, salted water.
Drain while still ‘al dente’ (firm but tender) and toss in the pan with the Granseola.
Sprinkle with chopped parsley and serve.