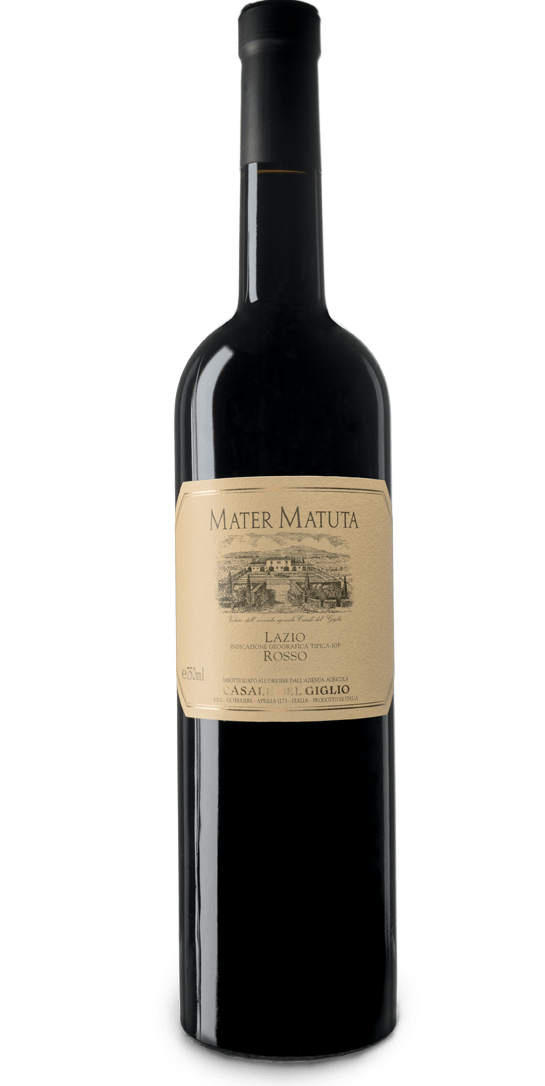 The name Mater Matuta derives from that of the ancient Italic goddess of the dawn, protectress of fertility and birth.

Her cult extended throughout central Italy and the famous temple of the ancient city of Satricum, situated close to Le Ferriere in the Province of Latina, was dedicated to her.

Syrah 85%, Petit Verdot 15%*.
Both red grape varieties are harvested when fully ripe (the Syrah may even be slightly shrivelled) and vinified in different ways. The submerged cap technique is favoured for the Syrah which ferments on native yeasts for 18-20 days. During the first few days of this process the fermenting must is racked and returned (the process of délestage) several times. Punching down is the technique adopted for the Petit Verdot as this approach guarantees an optimal extraction of the grape’s tannins and polyphenolic compounds. It is the resulting full-bodied Petit Verdot which gives Mater Matuta its long aging potential while the Syrah gives it its complexity of character, highlighted by smooth tannins and an intense aroma of black cherry and spice. As the new wines are carefully drawn off, each to its own first-fill barriques, the colour, tannins and aromas still present in the fermented skins are extracted in the soft presses to which they slide, aided by nothing more than natural gravity.

After 22-24 months in oak the wines are blended and left undisturbed in the bottle for a further 10-12 months.

A deep, dense, ruby-red wine which displays outstanding personality both on the nose and on the palate with its aroma of coffee beans, violets, ripe black cherry, coriander, nutmeg and cinnamon.

Silky and seductive, but perfectly supported by fine tannins and a pleasing astringency, Mater Matuta delivers a long, lush finish.