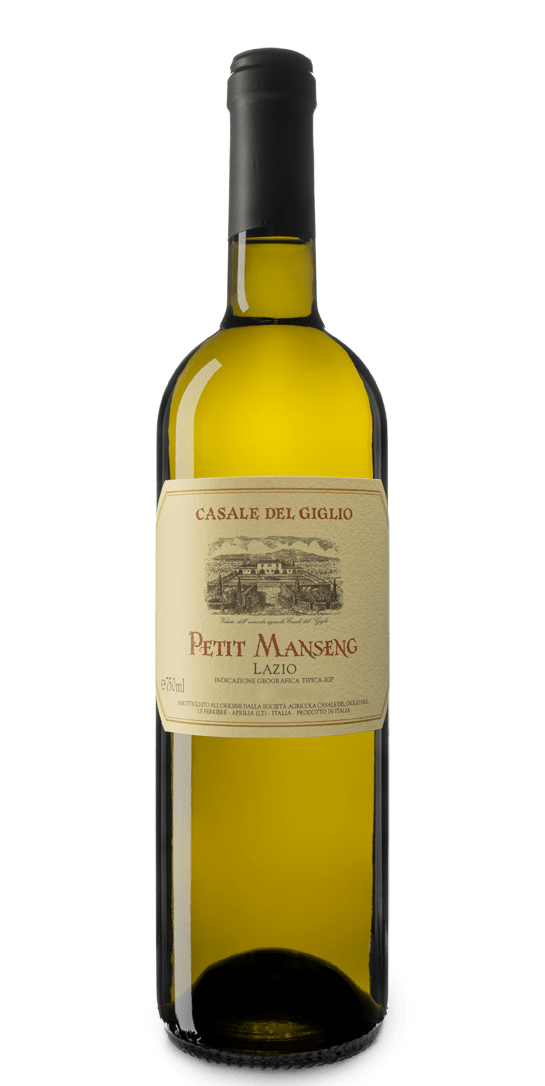 A native of the Jurançon region in the foothills of the French Atlantic Pyrenees, the small-berried, thick-skinned Petit Manseng grape from which this white wine is made, is more highly regarded than its larger-berried sibling, Gros Manseng.

As Petit Manseng’s small berries yield very little juice, they are not harvested until late autumn. By this time the grapes have shrivelled and their sugar content is at its most concentrated. This is the process known in French as ‘passerillage’.

Interest in the grape’s potential is growing in the Agro Pontino valley, where it was planted for the first time by Casale del Giglio in their vineyards at Le Ferriere, near the town of Latina, 50 km south of Rome.

After crushing and destemming the grapes are chilled to 7-8˚C and allowed to macerate at this temperature for 10-12 hours. They are then slowly and gently soft-pressed to avoid damaging the skins and sedimentation takes place naturally at 14-16˚C. Spontaneous fermentation enhances the aromatic characteristics of the variety and yeasts are not added until the second day. Ten days later, when fermentation (at 18-20˚C) is over, the new wine is racked and cooled to prevent the onset of malolactic fermentation.

After several months on the lees, the wine is bottled in March or April of the following year.

Brilliantly straw-yellow in colour, the wine is intensely aromatic, fruity and spicy on the nose, fresh, crisp and flinty on the palate.

An exquisitely structured wine which bows out on a seductive, fruit-filled finish.

Ideal with ‘Scorfano Ponzese all’Acqua Pazza’ – scorpion fish (from the island of Ponza) in flavoured broth.

This website uses cookies to improve your experience while you navigate through the website. Out of these, the cookies that are categorized as necessary are stored on your browser as they are essential for the working of basic functionalities of the website. We also use third-party cookies that help us analyze and understand how you use this website. These cookies will be stored in your browser only with your consent. You also have the option to opt-out of these cookies. But opting out of some of these cookies may affect your browsing experience.
Necessary Always Enabled
Necessary cookies are absolutely essential for the website to function properly. This category only includes cookies that ensures basic functionalities and security features of the website. These cookies do not store any personal information.
Non-necessary
Any cookies that may not be particularly necessary for the website to function and is used specifically to collect user personal data via analytics, ads, other embedded contents are termed as non-necessary cookies. It is mandatory to procure user consent prior to running these cookies on your website.
SAVE & ACCEPT
Go to Top